A new survey from SCMR and ASCM looks at how our readers and members are experiencing risk.

When the Supply Chain Risk Management Consortium was formed 10 years ago, Greg Schlegel, one of the founders of the organization, remembers that just four or five attendees out of 20 to 25 raised their hands when asked if they’d experienced a supply chain risk event. Now, Schlegel says the Consortium has stopped asking the question at its events because all of the attendees raise their hands.

Risk is everywhere: According to Resilinc’s Annual EventWatch Report, global supply chain risk events increased 36% in 2018. The company issued 2,696 event notices—an average of about seven per day. They range from fires and explosions at plants and warehouses to natural disasters to cyberthreats to governmental events (think tariffs) to quality issues and recalls to demographic shifts, to name a few.

Companies in a major crisis take a 5 to 50% hit to their stock price. These, of course, could extend beyond a supply chain crisis, such as a scandal in the executive ranks. Here’s another stat – 20% of all companies that experience a moderate to severe natural disaster in their regions are out of business in 15 to 18 months, and another 15% go out of business within three years of the event, according to the Supply Chain Risk Management Consortium.

Earlier this summer, ASCM and Supply Chain Management Review teamed up to survey our respective members on the first of what we expect to be several projects to understand how companies experience risk, and more importantly, how a risk event – or supply chain disruption – impacts shareholder value. “The motivation for this came from the top, explains Peter Bolstorff, executive ASCM’s vice president of corporate development, who says that it was a major topic of discussion at ASCM’s executive summit last February.

For this first survey, we kept it simple and looked to see what types of events our respondents were experiencing, when they experienced them and how long it took to recover. Note that we presented our findings at the 2019 ASCM conference in Las Vegas.  Here’s what we learned.

Nearly one third of respondents identified an issue related to quality control, or the quality of the product they were producing, as the most recent risk event to impact their companies, followed by Geo-political events (27%), the loss of a supplier (15%), a natural disaster (8%), or a financial or legal issue (tied at 4%). In the other category, respondents identified the loss of a carrier and issues related to raw materials from a supplier, tariffs and issues related to a new ERP system implementation. 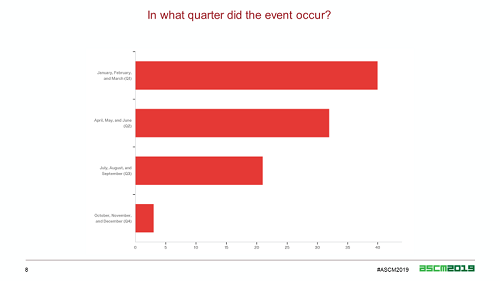 How long did it take to recover from the most recent event? Nearly 32% said it took less than a month while 26% recovered in 1 to 3 months and 13% recovered in 3 to 6 months and 10% said it took 6 to 9 months. But, remember: 75% said their most recent event was this year, which means that nearly a fourth of respondents are just now recovering from this year’s event. Nearly 20% of respondents noted that it took from 9 to 12 months (4%) to more than a year (15.7%) to recover from a risk related event. 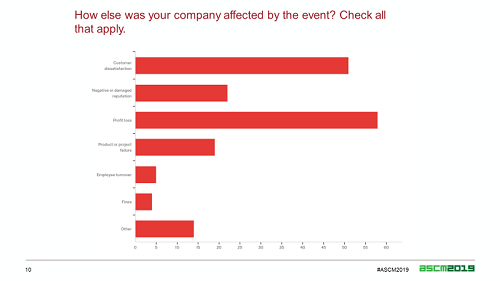 So, what are the impacts on a company from a supply chain disruption? A hit to the bottom line (34%) and customer dissatisfaction – which probably contributed to a loss of profit – at nearly 30% led the pack followed by reputational damage (13%), the failure of a project or product (11%), employee turnover (3%) and fines (2%). 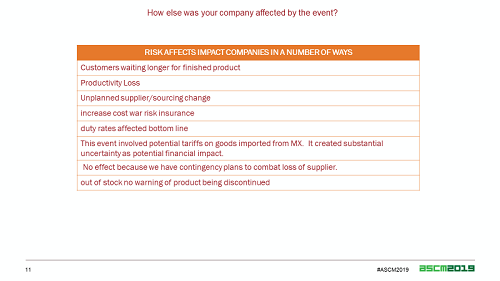 In the other category, respondents noted that customers waited longer for their products, there was a loss of productivity, they were forced to change suppliers, faced increased costs for insurance, new duties impacted the bottom line, potential tariffs (remember that geo-political events were a major source of disruption) created substantial uncertainty as a potential financial impact, and they had an out of stock because there was no warning that a supplier’s product was being discontinued.

Remember that old Scout Motto: Be prepared? One respondent said there was no effect because “we have contingency plans to combat the loss of a supplier.” Plan ahead!